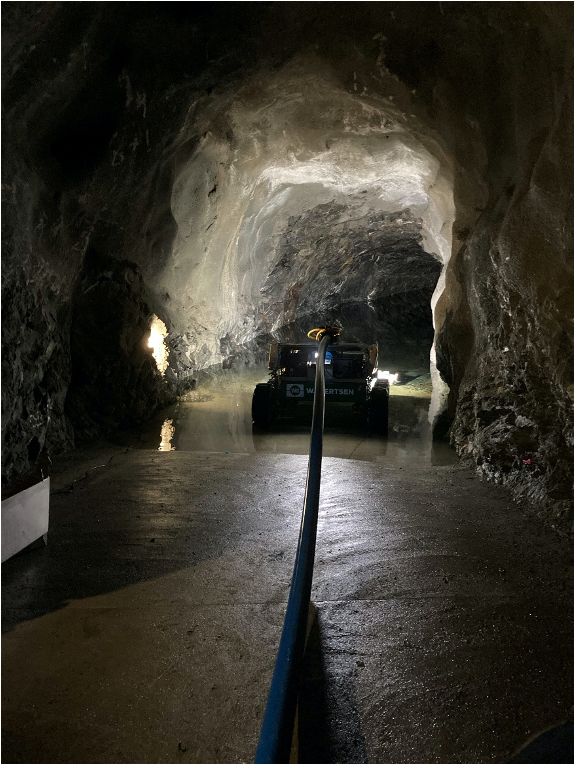 From idea to successful operation

Norway is blessed with an abundance of water. Ninety per cent of its drinking water is processed from surface water collected from lakes and rivers. The raw water is led in tunnels to a treatment plant. In many Norwegian municipalities, the treated drinking water is stored in large scale tunnel systems or rock caverns. These reservoirs are located on higher level for gravity and pressure and are in turn connected to the end-users via the distribution system. In line with national safety regulations, access to the tunnel basins is restricted. In many cases, lack of redundance also makes shutdown and emptying the reservoirs (to allow manual cleaning) an unacceptable option.

The tunnel basins storing drinking water in Norway are sizeable. The larger ones vary in width from a few meters up to 20 meters with a depth ranging from 5 to 30 meters. The length may exceed 4000 meters. Illustration 1 below shows a typical tunnel basin. Natural organic matter passes through the water treatment process and sediments in the basin's bed as the flow through the reservoir is slow. The tunnel systems were mostly built from 1950 to 1980 using the drill and blast excavation method. In the early years, the tunnel basins were temporarily emptied and cleaned manually.  Later, lack of redundancy made it virtually impossible to shut down tunnel basins - which represent a critical part of the distribution system. Health and safety concerns further complicate manual cleaning. Although the rock caverns are inherently stable, the ceilings and walls have not been secured. When constructed, no security bolts, nor shotcrete was used to secure the tunnel basins. Without safe option to clean the reservoirs, the sediments have been allowed to accumulate over decades.

Initial market searches did not reveal any existing technology that could perform this very specialized task under such demanding conditions. Without an established market, innovative sourcing techniques were adopted. Recognizing that securing safe access would be prohibitively expensive or impossible (due to lack of redundancy in the distribution system) ten municipal water works establish a sourcing /technology consortium in 2014. The group was led by Bergen Water, the municipal water works in Bergen, Norway's second largest city located on the West coast. Leading suppliers to the water industry were invited for a conference and an idea contest was organized. The general concept described in the bid was an un manned robotic cleaning device that would pump sediment out of the reservoirs. The call for content from the consortium further specified that the machine should satisfy the following criteria:

Anders Berg and IKON Norge won the competition in 2015 with a concept that combines ideas from subsea Remotely Operated Vehicles (ROV) with pumps and cleaning methods used for similar cleaning in small gravity basins for drinking water. To secure venture capital, Berg approached the industrial group W. Giertsen, which among others is market leader in water proofing solutions for rock caverns and tunnels in the Scandinavian market. W. Giertsen quickly saw the potential in the TROV and was able to raise funds and to introduce a related company that could provide the TROV with control and monitoring technology from the subsea ROV-industry. Together with Berg, W. Giertsen established a joint venture – W. Giertsen WaterTechnology / Vannteknologi. Finally, and very importantly, the municipalities contributed with grants to the development project. The concept called Tunnel ROV or TROV was officially launched.

Key features of the TROV:

W. Giertsen Vannteknologi successfully cleaned the two first tunnel basins for the Municipality of Bergen 2H 2020. Over the next years we will clean the remaining reservoirs in the extensive network of tunnels and basins surrounding Norway's second largest city with a population of approximately 300.000.

We are presently discussing cleaning other waterworks' reservoirs and are preparing to build a second TROV. Thereafter we envision a fleet of TROVs. Together with our experienced organization an initial assessment of access, civil works and sediment characteristics in the respective water tunnel is performed. Based on customer needs we are prepared to develop custom-fit solutions.

Norwegian authorities estimate that 320 bn NOK will be spent on upgrading the national drinking water and waste water infrastructure over the next 20 years. W. Giertsen will invest further to develop innovative solutions that solve tomorrow's challenges in a sustainable and efficient manner.

Initial market survey indicates similar cleaning needs in waterworks in many large cities. Typically, the infrastructure is 100 to 150 years old. Faced with the prohibitively large investment of replacing water and sewage systems it makes sense both economically and from a sustainability perspective to invest in state-of-the-art cleaning as an alternative.